Hurrah, I am back! Time to get active again. :)

My current project is a Space Marine Raptors army. So a little bit of Forgeworld in this one too. But I am not that super updated on the 7th edition rules, so I am trying to configure the army as I write. I have painted a few figures, and will probably update tomorrow with some pictures and information about what non-Games Workshop parts I am using.

There is not that much to say about the battle I mentioned in my previous post. Squad Taexali managed to secure the relic, and made a tactical retreat to keep out of range of the enemy's Scout snipers. A unit of Nobz had entered the battle from reserve, but they were butchered in one turn by the allied berzerkers. So it was pretty much a sweet victory for the Chaos side.

Yesterday I fought a battle against a Space Marine army led by Pedro Kantor. I knew that he wouldn't have many vehicles, and no flyers. So I could focus on a list that I really wanted to play.

My opponent wasn't quite ready to face an army like this. Had it been a foot slogging army without vehicles he had had a better chance I guess. Now he faced a massacre.

Basically he had:
Kantor,
a chaplain
a sternguard unit,
three tactical units with a plasma gun each and power sword armed sergeant
a tech marine with heavy bolter servitors,
a missile launcher devastator squad,
a venerable dreadnought with assault cannon and power fist
and an empty landraider crusader.

We played a Dawn of war battlefield and the Emperor's will mission. He placed his base objective in the open, while I placed mine in a ruin, guarded by The Brazen Firm.

To my luck, we had night fighting the first turn. So I sent Khârn with Creones, the two defilers and the decimator towards his base objective. The objective was guarded by three tactical squads, the dreadnought and the Techmarine with crew. This was on my left flank-middle of the board.

Facing my base objective, on my right flank, was Kantor and the sternguards, the devastators and the landraider crusader. So I sent Caratacos, Taexali, Venicones and the two Helbrutes to take the fight to them.

Initially the devastator squad blew Venicones rhino apart. Then half the sternguard unit and pedro opened fire upon Venicones. The rest of them were behind a hill - later to be named "Hamburger Hill".

As the sternguards used Kraken bolts fully nine bolts wounded Chaos Space Marine Duer who was in the front. But Khorne had other plans for him, so he waded through the storm of bolts, and led the charge up "Hamburger Hill", where the devastators made their final stand. Champion Venicone challenged the Devastator Sergeant and slew him, while the rest of Venicones made short work of the other marines.  When time came for consolidation, they withdrew down from the hill.

In the mean-time Warlord Caratacos and Taexali had disembarked. The plan was to have Venicones run over the hill, and charge the sterguards behind. But to their amazement, the sternguards went up the hill and opened fire, killing Champion Venicone and an un-named chaos marine. The Crusader opened fire as well, but didn't manage to kill anything.

Now Taexali's rhino pushed through, and turned on the dirge casters, so that the Sternguards couldn't open fire upon Venicones and Taexali as they charged. At the same time, the two Helbrutes charged the crusader.

Unfortunately Kantor had left the Sternguards and called in an orbital bombardment upon Khârn and Creones, killing six berzerkers.

Warlord Caratacos challenged the Sternguard Sergeant, who accepted - and died. Khorne immediately rewarded Caratacos with daemonhood, turning him into a mighty Daemon Prince. Champion Taexali killed five Sternguards, while the rest of the squad slew the rest.

After that Taexali assaulted Pedro, who killed Champion Taexali in the challenge. But in the turn after that, the remaining berzerkers hacked Pedro to death.

Daemon Prince Caratacos set off towards the right flank.

In the meantime the two Helbrutes had cornered the Crusader, which couldn't drive away, and so they destroyed it.

After that, he charged the tactical squad led by the chaplain bellowing a challenge. The Chaplain accepted, and was instantly killed. In the next turn he challenged the Sergeant, who declined. In his place, the rest of the squad (5) was killed by Khârn. They had already taken some casualties while fighting the Decimator. And after that, Khârn killed the coward Sergeant.

While this was happening, Venicones had destroyed the Techmarine and his servitors, and now secured the Space Marine base objective.

But now the only major set-back happened. The remaining tactical squad stepped forward like a firing squad and killed Khârn. Or did they? Khorne probably has other plans for him.

Finally Daemon Prince Caratacos charged the tactical squad and killed them all.

The wipe was a fact in turn six.

I will add one or a few photos in a couple of days.

Today was the first blood for the Violent few. A small part of the warband (500 points) joined forces with an other equally small warband. Together they fought an unholy alliance between Orks and Ultramarines.

The game is not quite yet over, because we didn't have to time to finish it off. So it will continue tomorrow. And I won't tell you all about the battle until it's over. But I will tell you about how Lord Caratacos and Squad Taexali managed to claim skulls for Khorne.

Lord Caratacos rode together with Taexali in their rhino towards the center of the battlefield. The objective was to retrieve an unholy relic. The rhino stopped between a small wood and a cottage. Just as Caratacos and Taexali had disembarked, the rhino took a hit which immobilized it. They ran around the cottage, trying to close in with two Ultramarine combat squads and the enemy Warlord, an Ultramarine Captain. But a squad of allied Possessed beat them to it.

Just as they were about to charge in, a huge mob of Ork Boyz with shootas showed up and shot Champion Taexali and a Berzerker dead in their tracks. Lord Caratacos immediately ordered them to charge the Orks. And that they did.

Lord Caratacos led the charge as they smashed into the Orks. He fought with unmatched fury, and managed to disembowell no less than six orks during the first turn. Two berzerkers had been shot by the boyz as they charged in, but the remaining three managed to kill another six orks.

The remaining orks lost their guts to fight, and turned to run. Lord Caratacos saw this and urged his squad to finish them off. And chain axes and chain sword made a short but bloody work of the orks.

When they were done Lord Caratacos told one of the berzerkers to pick up the relic, and then they ran to help the possessed and an allied squad of berzerkers to kill the Ultramarines and their captain.

As they charged in, Lord Caratcos issued a challenge to the Captain, who couldn't decline. Caratacos decapitated the Captain, and was rewarded by Khorne with eternal life (Eternal warrior). The rest of the Ultramarines were butchered by the three remaining members of squad Taexali.

A fine start for Khorne's finest! 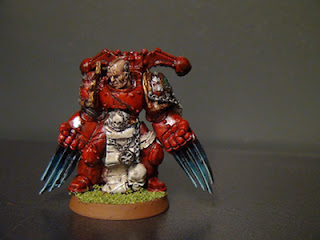 I have completed the first third of my cultists. That is ten models. I need to buy a new pack of Cadians (20) to complete the unit.

But in the meantime i have begun painting my Chaos Space Marine squad (CSM squad). They will be equipped like this:

And here is the squad's Champion. Made from a metal Chaos Lord, who in its original form looks to be a Black Legion Lord. But I swapped the bare head with a top knot for the open berzerker helmet. The helmet is a bit too large to fit in nicely in the place of the bare head, which makes him look down. But I figured that I will later on re-base him, and have him standing on top of a decapitated Dark Angel. And you all can see where the Dark Angel's head is right now. 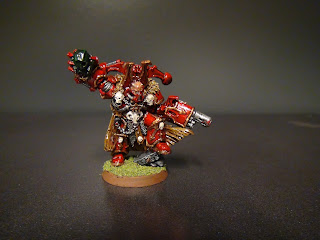 By the way... We are going to start a new Mordheim campaign. This time I will probably create a new warband. I will stick to humans, and most probably a Reikland or Marienburger warband.
Upplagd av Caratacos kl. 04:26 Inga kommentarer:

Two more cultists done. The first is my Cultist Champion. He is based upon one servitor model, with the addition of a Catachan arm and some grenades. The other one uses a Cadian body, a Catachan head and a female head from the old Confrontation game. I will probably add some blood on the base below the head. 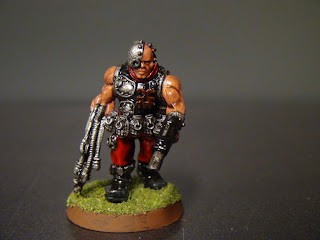 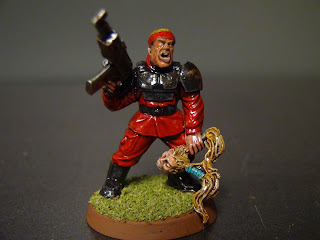 Time for a World Eater update. The Violent few will be supported by a bunch of cultist hang-arounds. They will be led by a champion who is a former gladiator. The cultists themselves, is a bunch of crazed ex-imperial guardsmen, who have openly opposed the imperium and started to worship Khorne.

The arms, legs and torsos are from the Cadian Shock Troopers kit. One of them though, has got arms from the Catachan range. The heads are from MaxMini. 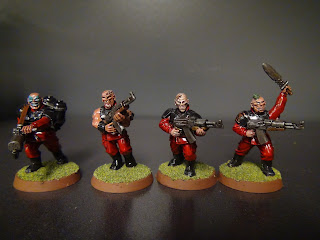